What is a mole?

With most of its time spent below the ground, Moles (Talpa europaea), a member of the Talpidae family, can’t be seen as often like other wildlife animals. An interesting characteristic of moles: they eat soil insects as their main food source.

Their average size is around 6-8 inches, with distinctive traits that include small ears, tiny eyes, hairless slim snout and dark velvety black grayish fur. They have unusually big feet relative to their size, with outrageously large claws in which they generally use (most of the time) for digging soil. 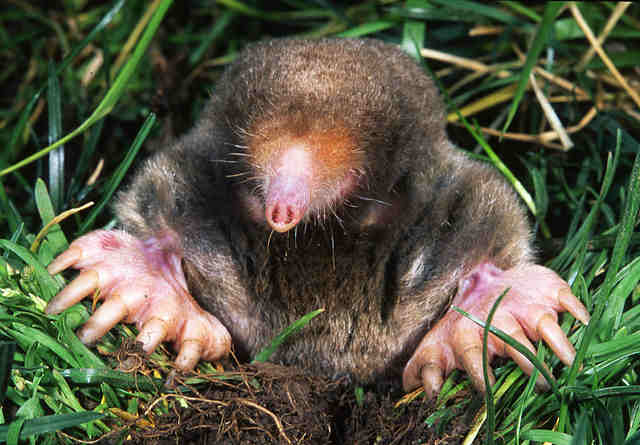 During spring season, moles do not spend time with other moles as they tend to live a solitary life. If you notice several underground tunnel patterns in your lawn, chances are this has been done by just a single mole. The multi-tunnels that you see will notably be symmetrical and round, with entry/exit mounds, but visible and in a pushed-volcano-like appearance. Moles build tunnels persistently, constantly pushing the ground, so rarely will they use the same tunnel again.

The mounds that you see on the ground usually connect to main pathways or long runways which moles like to use many times. These runways stretches 12-18 inches, mostly covered in dirt. As they burrow their way underground they feed on insects they will encounter in the soil like the larvae, white grubs and earthworms. The moles prefer sandy, moist and loam type of soil than the heavy, clay and dry soil. Moles live below the ground all year and mostly become active during warm and wet seasons. 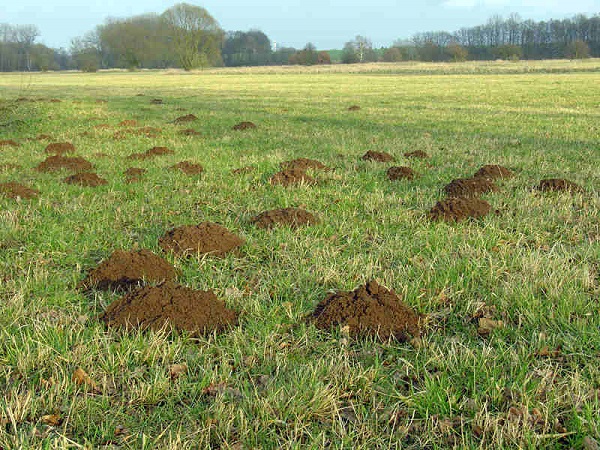 By Karelj (Own work) [Public domain], via Wikimedia Commons

A common question about moles is this: “How do the moles live in their daily life?”

Known as insectivores, moles staple food are the insects they encounter underground. They usually like all types of worms from earthworms and grub worms, with their body mass mostly made up of the high protein they get from the worms that they eat every day. Building tunnels require lots of sweat and strength, so the worms they eat provide the needed energy and muscle for all those digging. Solitary and territorial, one mole can do as much damage to your property’s backyard, garden or lawn. 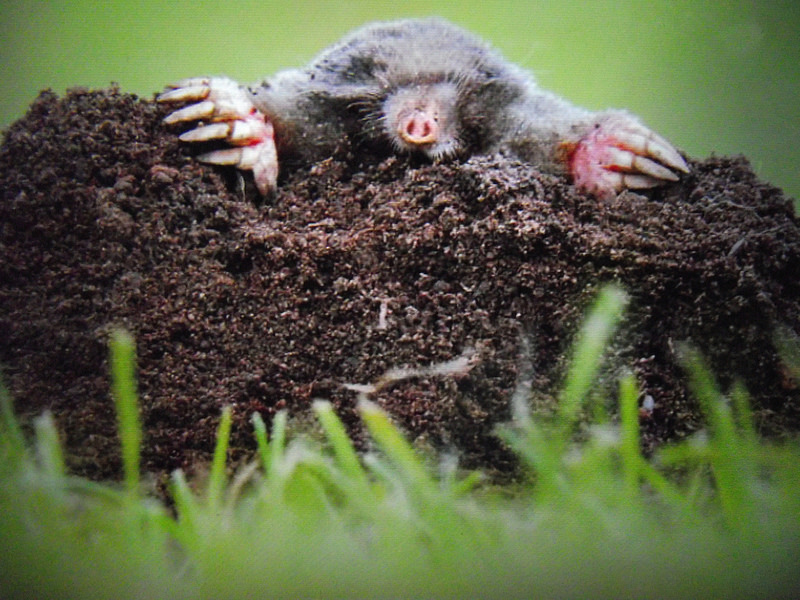 Most home owners, who have wildlife removal problems with moles, think that since these mammals love to dig and seek grub worms, the solution to drive them away is to apply chemical pesticides that will eliminate their staple food (the grub worms). On the contrary, this mole-removal-strategy will not push away the mole; it will increase its digging activity further more (which meant bigger soil damage). Since the pesticide you apply will most likely kill all the ground insects including the earthworms, larvae and grub worms – the mole will dig tunnels in frantic and panic mode. So when the time comes for the animal to give up and move into the next backyard, the mole has significantly created a lot of tunnel underground and ultimately damaged your soil.

Studies show moles spend most of their time alone, digging underground searching for food. They rarely come out, above the ground and if they do, they probably end up at the surface or at end of the path that they took. If you have several moles in an area, sometimes they only meet by chance (or they are seeking mates), but by nature, they do not hang around with the other moles for a longer period.

How do moles breed?

Their breeding season depends on species type, but generally this happen from January to May. Males seek female moles by ‘mating calls’ of high-pitched squeals as they dig through the area. The gestation period of the US (eastern) mole (Scalopus aquaticus) is around 42 days, where 3 to 5 young moles are born. Mole pups usually leave their nest 4 to 6 weeks after their birth to seek their own territories.

What is the habitat of a mole?

The creature’s unusual food necessity notably determines the large space that they need to cover as their territory. Male moles in particular cover around twenty times the area size of male pocket gopher. For instance, there are around 3-5 moles per acre (on average) and already widely considered as highly populated for the mammal.

The runways and pathways from the animal’s den often lead to its main hunting ground (digging area) for their food. This den area is made up of abstract shaped chambers on all directions, but consistently connected with deep long network runways (of 5-9 inches) below the ground surface. These chambers measure close to a standard quart size of jar. 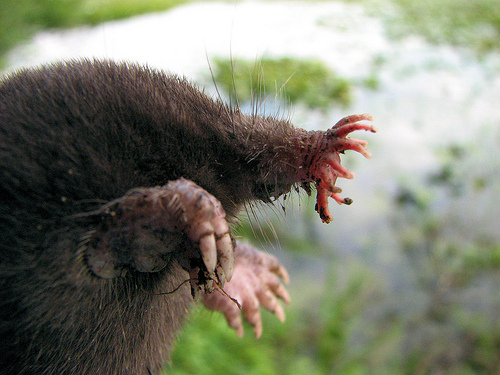 With the parasites or larva that they encounter underground the soil, moles pose considerable health risk to children, adults, as well as household animals like cats, dogs and birds – in case they appear above the surface and made accidental contact. For instance if your dog found a dead mole and brought inside your home, that mole need to be thrown away by using ample cover when you pick it up to place on the thrash bag, sealing tightly and perhaps, putting it in a second garbage bag and then disposing it properly on the trash can. Disposing it properly on the garbage eliminates pests and insects like flea, flies or tick which swarm the mole’s body.

If you believe there’s a mole digging in your soil outdoors, locate the longest tunnel runway and stomp on them. Destroying the long tunnel can initially irritate them and can force them to leave for the time being.

This long tunnel usually connects to smaller tunnels, which they dig to search food, but these short tunnels are used only once. However, remember that if the soil in your home is good and rich with worms, stomping might not help – the mole might just dig other tunnels.

Flooding the tunnels with water might work, but only if you will be able to trap the mole with water and the surface. As explained, moles “live to dig” and most likely they already created extensive tunnels within the area for them to escape the flood. Most likely though, they just might dig longer and more tunnels far enough from the water. The success of the flooding method also depend on the soil, if you have sandy soil (which absorb water fast), then it might not help.

Vibration noise and other devices

Commercially developed high pitched devices are marketed with the objective to drive away moles. However, this can only work for a shorter period since moles often ‘get used to the noise and bypass it altogether’. Such devices (like the ones used for other animals) work on first couple of days, but not for longer extended periods. Probably better to skip this step all together and save your money.

Another method used by home owners is by trapping the moles. However, you would need the help of a professional wildlife removal company so an effective strategy and method can be applied in your home. Mole removal experts are highly-trained with years of experience in removing and trapping moles in any type of soil and in all types of terrains, gardens, lawns and yard. You can call a mole removal professional for questions and for other concerns!