(Please call Country Club Hills Animal Control for all your domestic animal issues, including dogs and cats at 708-798-3191)

Wild and rabid animals are dangerous as soon as they leave their natural lair – with squirrels, skunks, bats, and raccoons sometimes finding their way into apartments, houses, and building in Country Club Hills, Illinois. If home owners fail to notice vicious animals in their property, wildlife animals can pose harm and injury to people especially when it gets out of control. Don’t take these for granted. Call us for your Country Club Hills IL Wildlife Removal services for raccoon removal, skunk removal, squirrel removal, and bat removal in Country Club Hills.

Neighboring Hazel Crest in the east, Markham to the north and Matteson to the south, Country Club Hills is in full development and restructuring mode. Just near the Tinley Park and Cook County Forest Preserves, it’s natural landscape, thicket, and woods attract some of the most virulent and undomesticated creatures from the wild.

Not spared from animal intrusions, residents and neighboring communities in the city would often deal with such wildlife animals, though most of the time unsuccessful, with some of the creatures returning even carrying their off spring. Home solutions to expel wildlife animals often don’t work. It would be more effective if you call experts on untamed animals. Contact Track N Trap, a Country Club IL Wildlife Removal company, they are experienced and uses effective wildlife extraction and preventive methods.

“We have a raccoon in the children’s bedroom!” … just one of the calls we receive from residents of Country Club Hills in Illinois. Raccoons don’t usually leave their habitat in the jungle, not unless something disturbed them in their sleep. They usually seek a new place and most often they find houses a nice place to snug in.

If you see a raccoon in your apartment, don’t be the usual ‘tough dude’ by extracting the animal yourself. As harmless looking the raccoon can be at first look, lying and resting there in a corner of your house, it might fight back just like any animal when they get hurt. It would be better if you call a Country Club Hills Wildlife Removal company that offers raccoon removal services.

Did you know the Ebola virus was said to have been carried by bats in African forests, long before humans contacted the disease? Considered as carriers of deadly pathogens, bats eat insects in the jungle and considered by scientists as a live reservoir of killer viruses. As beneficial as the bats providing balance in the Eco-system, it is a dangerous creature to have in human dwelling places like residential areas and household.

Most people would attempt to eliminate the bats that they see in their property, either by using long wooden sticks or brooms. However, this is not a good idea since there is a danger that the bats would attack and bite. It would be better if you contact a bat removal professional, through a Country Club Hills IL Wildlife Removal company. Track N Trap offers bat removal services and can provide solutions to your wildlife intrusion problems. 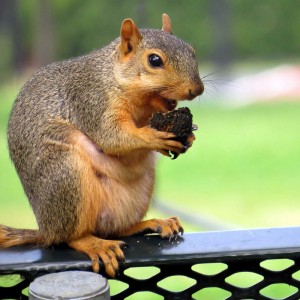 Squirrels move fast and fit in small holes and cracks – often finding places where they can store their nuts. They are nimble and flexible, with their hind limbs capable on being stretched. These creatures can even squeeze their way in tubes and pipes, leaving traces of seeds and several small fruits. The closest cousins of the squirrels include rodents, dormouse, beavers and chipmunks. They’re highly adaptable in the wild and can sometimes create their habitat in households and apartments.

When hunting for their food, squirrels often work in groups, following one after the other as they move and carry their staple from the food source to their secret storage place. One weird call we received for Squirrel Trapping in Country Club Hills IL trunk line is from a home owner saying that one of his household pipes were stuffed with tons of nuts. Considered to be one the most cunning and wily animals in the wild, squirrels can be difficult to catch, so we always recommend calling a Country Club Hills IL Wildlife Removal Company to handle the problem.