(Please call Hampton NH Animal Control for all your domestic animal issues, including dogs and cats at 603-929-4444)

How to remove beavers in my home? This is just one of the calls we receive on a daily basis in Hampton in Rockingham County in New Hampshire. Other nuisance animal intrusions we frequently receive regularly include raccoons, flying squirrels, moles, opossums, groundhogs, rodents and bats. If you have persisting problems on wildlife control, please call our number on this page. We provide Hampton NH wildlife removal and wildlife management on the following:

Hampton is a popular visitor’s destination for residents and foreigners in New Hampshire, who want to spend some ‘rest and recreation’ in Hampton Beach State Park. The area sprawls with full economic growth and development as seen in city’s long stretch of resort facilities, restaurants, gift shops and year-round seasonal housings. However, within the bustles of town activities, nuisance animal intrusions have been seen intruding several Hampton establishments. The same can be said in Hampton NH houses, apartments and households.

Ever wonder how flying squirrels were able to enter in your attic? The flying squirrel actually uses their ‘parachute’ membrane attached in their skin as a ‘glider’ to move from tree branch to another branch (in other instance from trees to house upper windows and rooms). As soon as they approach a landing spot in your place, they pull their stretchable skin to slow their landing.

Here’s a trivia on beaver dams. Widely known in the wild as chief builders of dams, the biggest known dam discovered was in North Alberta in Wood Buffalo National Park. The beaver dam is said to measure around 860 meters or approximately 2,800 feet, almost double the width of the Hoover Dam (1,244 feet or 380 meters)

Did you know about the raccoon’s intelligence? Several studies from the 1960’s to 1990’s were conducted to test and study the raccoon’s apparent intelligent nature. In one of the experiments by B.Pohl, the raccoons were tested to differentiate and identify various types of symbols, given in a short period of learning. Pohl concluded that after three years, the raccoons still remember some symbols.

Our other Hampton Wildlife Control Services

We’re sometimes asked in our visits in Hampton on how bats breed. Here are some facts on the female bats. The female bat usually chooses the most appropriate time to give birth to their young by delaying development of a fetus. During this process, oxygenated blood and nutrients is continuously supplied to the egg, but this can go in long extended periods because of the bat’s gas exchange system. This allows the bat to give birth to the young in a time when they see a huge population of insects or high volume of other food sources.

How well do you know about the underground animal mole. Even if a mole has been widely known as a solitary animal that prefers to live on its own, they do seek mates in their breeding season sometime in February to May. The usual mating call of the male mole for the female mole is by giving out a loud pitched squeal. As soon as they find a female mole, they would tunnel their way through the ground to breed with a mole female.

If you’ve seen a groundhog in your garden in Hampton, it probably was drawn by what you have planted in your place. The groundhog is primarily known as a plant eater where it eats crops, berries, grass and leaves. However, the groundhog will also seek invertebrates and other small mammals. They are also known to eat snails, small frogs, insects and grasshoppers.

Several muskrats can be lost and find their way in Hampton. Often muskrats are displaced by developments which lead them into residential areas. Another reason is a larger wildlife animal. A muskrat can fall prey to a lot of bigger animals in the wild. Large reptiles, alligators and crocodiles are known predators of the muskrat. In the southern part of the United States, particularly in Florida, muskrats are said to be low in population or have been missing and experts point to alligators as the predators.

Do you have trouble sleeping at night because of some noise of an unidentified creature? It could be an opossum. The opossums share similar traits with the rats and mice. Opossums prefer to be active in twilight and would rather make their movements in the dark. They favor secured dim areas, rather than lighted places. They can live in abandoned burrows by other animals, but they do not necessarily exert energy to dig. Still they can be found under houses and structures as reported in Hampton. 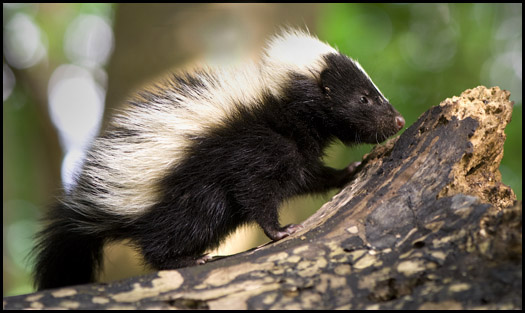 Here’s some fact on skunks. The skunk will seek a mate usually around early spring and is said to be polygynous. A male skunk can have or seek multiple female skunks during their breeding season. The female skunk has sixty six days of gestation period and gives birth around May. The skunk female usually digs and excavates a den, where they can house their young skunks of 4-8 kits.

Do you have trouble removing rats? The rats have been widely considered pests because they are live carriers of fatal diseases like the Hantavirus and Leptospirosis. The Centers for Disease Control has more than 12 other illness that can be contacted from rats. The rats are invasive species and need to be controlled the soonest it starts an infestation.

Here’s an interesting trivia on birds. A distinct trait which most birds have is their respiratory system. When a bird inhales fresh air, only 25% goes directly to the lungs. The 75% air they breathe usually bypasses the lungs and goes directly to their posterior air sac, which connects to air spaces in their bones all over their body.

The squirrels you see in Hampton NH can be divided into several subgroups, which also have their subfamilies. The Sciurini group includes the well known American tree squirrels, while the Sciurinae has the Pteromyini flying squirrels. The Tamiasciurus pine squirrels is related to the lineage of the tree squirrels, but has their own family, the Tamiasciurini.

Be on alert at all times against wildlife animals, since it’s a matter of saving your properties, furniture and appliances from damages, as well as saving you and your family from illnesses that you might have. It’s better to be safe at all times. It’s given that you have to spend on wildlife management, but it could be more if you allow the wild creature stay longer in your property. Call us in Hampton NH in our number below.