We’re a local Hurst TX wildlife removal company that can handle different wildlife problems brought by raccoons, rats, snake, skunk and squirrel. Don’t put off for another day the removal of these animals. They can inflict harm to you and your children. You certainly don’t want any injury or diseases to you and your love ones. You can prevent entry of these wild animals at the very start. We can also handle beaver, bobcat, birds, possums and armadillo. 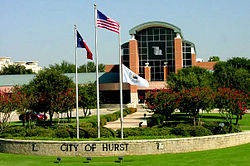 Hurst is made up of mostly land at 9.9 square miles, with little bodies of water. Located within Tarrant County, it is part of the Mid-cities in between Dallas and Fort Worth. A suburb in Fort Worth, it is named by its founder William Letchworth Hurst. There are several large businesses in the city namely Bell Helicopter Textron, North East Mall, Wal-Mart and Dillard’s. The city also boasts a couple of open parks for the public particularly Hurst Park, Redbud Park, and Chisholm Park. Bellaire Park is around 11 acre of parkland, open space and trails. The largest nature area in the city, Chisholm Park occupies as much as 50 acres of park land.

Bats also carry rabies, so it would be dangerous to take chances and handle them with no protective gear. Just call a wildlife control company with Hurst bat specialists. These professionals are experts in bats and have safety procedures in their books. Let a bat removal company do the work.

Some nature observers notice that a single beaver will not only build a single dam, but may also build a secondary or even a third dam. The secondary dams are usually built at a downstream of the main dam. These dams are smaller than the first dam and serves as a support or reliever of water pressure on the big dam to prevent being ruptured.

The home range of armadillos has been fairly limited to the south. There were since reports of sporadic appearance of armadillos in the north eastern states and nearby communities. Some cities in Texas have since created armadillo hunting to mitigate the expansion and growth of the animal. However, licenses and permits are needed before hunting and handling of wildlife animals.

The female possums have a pouch, with fur made up of awn hair. Both male and female possum on the other hand have prehensile tails just like the ones you see on the monkeys. Their tail actually has bear scute, as well some part of their feet. Possums have very simple digestive system as they only have the small cecum. For the male species of the possums, a unique physical trait is their twin glands forked penis.

The presence of rats in a house always brings anxiety because of the unhealthy appearance of the creature. In history, rats has been known for its disease carrying trait, and it has carried and spread diseases and zoonotic pathogens like Toxoplasma gondii, Leptospirosis, Campylobacter and Yersinia pestis (bubonic plague). Another illness known to have started in rats is the foot-and-mouth disease. In Hurst, no one definitely wants to have rats in their place, whether it’s the home or their business.

Call us today in Hurst Texas for your wildlife removal requirements.