In need of local Alabama Company that deals on wildlife, we now provide Millbrook AL wildlife removal on raccoon, armadillo and beaver. We also provide nuisance animal control on other critters and burrowing animals like squirrel, rat, opossum, skunk, fox and gophers. Our frequent calls from Millbrook include the following:

Millbrook City has a relative small area, with 12.8 square miles or 98.2% land. The body of water can only be seen in 1.8% or 0.3 square miles. Several areas of undeveloped areas can still be seen with dense trees, woodlots and fields, which attract wild Alabama animals all year round.

If the raccoons that you encounter in a nature trail appear tame, don’t be tempted to feed them. Some people think timid animals are not aggressive so they feed them. Raccoons are not used being hand fed and the animal may feel threatened by people. Millbrook raccoons can search for their own food, which means they can eat meat or plants, whichever are plentiful. Let raccoons find their food in Millbrook.

Alabama has different types of squirrels, perhaps one of the most common wildlife animals that can be seen in Millbrook. One important point you can take note is on how the squirrels has now managed to adapt in urban settings in towns and cities. We can help you remove or prevent squirrels.

Alabama bats consume insects most of the time. The species we’ve removed in Millbrook frequently are the microbats. An interesting trivia on microbats is on how they eat insects in volume, sometimes more than half their weight. One microbat can actually eat as much as 3,000 insects in an evening. Bats can settle in on houses. You may have to remove them immediately as precaution.

The Alabama armadillos, particularly the 9 banded armadillo found in Millbrook originally came from the central and southern part of the country. The animal, if not for its distinct shell, can scare people away because of its strange looking armored body. If you like to remove armadillos in Millbrook, just call our number. 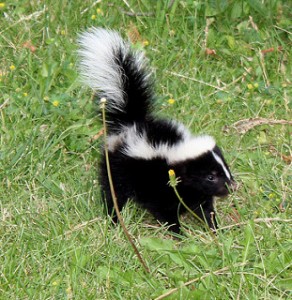 The Alabama skunks, in particular in Millbrook, are average in sizes. They have somewhat like a rounded triangle head, with rounded nose. The eyes are small, dark black, bead-like. They also have smaller ears. More than their animal cuteness, they don’t smell good. We can help you remove skunks.

There’s no other animal in Alabama that have grown fast in population the past couple of years than beavers. Dams or lodges, which beaver often build as their refuge, is pretty much common all over the state. Even if dams would show the architectural skill of the Millbrook animal, having the animal lodge in a property is not good. In Elmore, we can assist you in beaver control.

For nearby communities, call to confirm availability.

Animals native to wildlife belong to their habitat, not your household. Contact us for removal.