What are opossums / possums?

There are more than 60 several species of Opossum, and are commonly known as possums. The most popular one is the Virginia opossum – and it is the only marsupial (pouched mammal) commonly found in Canada and the United States.

A female opossum gives birth to young ones which are very helpless and as tiny as honeybees. The young ones crawl immediately into the mother’s pouch, where they will develop to mature opossum. As they get bigger, they get out and in of the pouch and in certain occasions they ride on their mother’s back as she goes hunting to get a meal. Opossums give birth to over 20 babies in a litter, but only half of the babies survive. Some of them don’t get as far as the pouch.

Opossums are scavengers, and they constantly go to human settlements or homes to raid dumpsters, garbage and other containers. Possums also eat nuts, grass and fruit. They will hunt insects, worms, mice, birds, chickens and even snakes.

The Virginia opossum is the only marsupial found in North America. It is an animal with a pouch, just like a Koala or a kangaroo. The opossum is one of the Earth’s oldest surviving mammals. 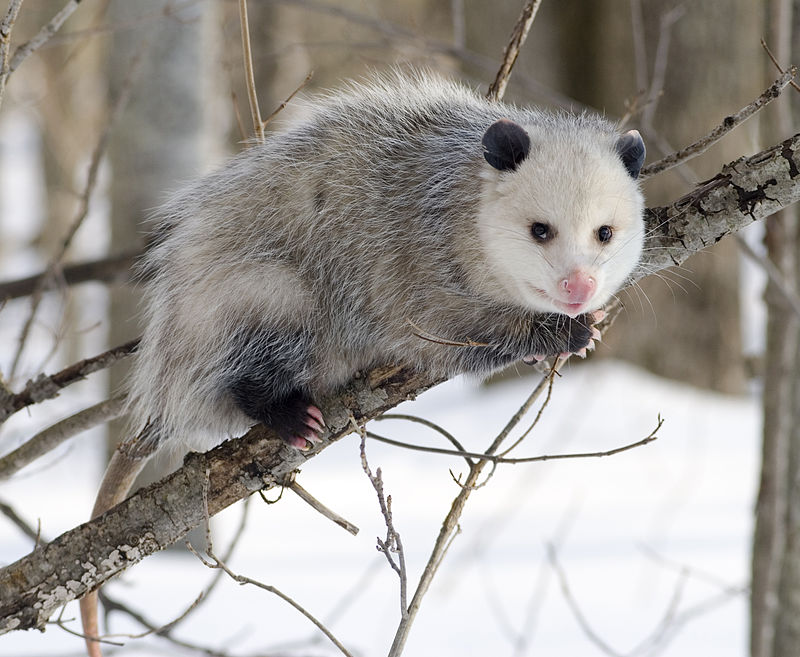 The animal is about the same size of a large house cat. It has a long pointed nose and has a triangular head. The animal has a grayish fur on every part of its body except on its tail, feet and ears. The opossum tail is prehensile. The tail is adapted for wrapping around things like tree limbs and for grasping. The animal can hang from its tail for a short period of time. Certain individuals think the opossums hang from their tails and sleep but they don’t. Their tails are not very strong to support them for a long period of time.

The animal has opposable hallux which is very similar to a thumb. The “thumbs” are found on its rear feet. The hallux comes handy in helping it grasp branches when it is climbing.

During the winter period, the possum does not go to hibernation. It will frequently hole up during the cold weather to avoid running the risk of getting frostbite on its hairless tail, toes and ears.

The Virginia possum occupies a wide range of habitats such as open woods, farmland and deciduous forests. The animal in most cases prefers wet areas like swamps, streams and mashes.

Possums have a huge range of behavioral adaptations that they use to survive. When the animal is endangered, it will display behaviors like growling, urinating, belching, running and even defecating. In certain occasions it will “play possum” and turn over, become rigid, drool, and its breathing rate will be slow and shallow. The animal will remain in this coma state up to four hours and some predators will think it is already dead and walk away.

The animal’s name “opossum” was initially used in western culture by Captain John Smith in 1608. It originated from the Algonquin name “apasum’, which implies ‘White animal.’

The animals may never be seen as they travel through yards or neighborhoods because they are only active at night. The first apparent clue that they are around is the sound of barking dogs and missing pet food left out overnight. In certain occasions weird looking droppings might be found on walkways, patios and garden paths, although typically opossum defecate in secured and leafy areas. The scat is tricky to explain as the omnivorous eating patterns of the animal exclude an average size, texture or shape.

The animals are messy feeders and as such you might get remnants of the earlier night feeding and foraging. An instant visit by the family of opossum or an opossum might not call for any concerns unless you have pets that stay out doors at night. Opossum and pet confrontations are very common and in most cases pets are injured. To avoid such an issue, it is imperative to take action immediately.

Fleas carry a disease called murine typhus. The disease occurs in humans when they are bitten by a flea that has been contaminated with fecal material. The common symptoms that indicate one has the disease are fatigue, severe headache, muscle aches, fever and a rush. The disease can be prevented with an effective flea control program for your pets and the eradication of rodents. Opossum also carries another disease called Chagas’ disease. 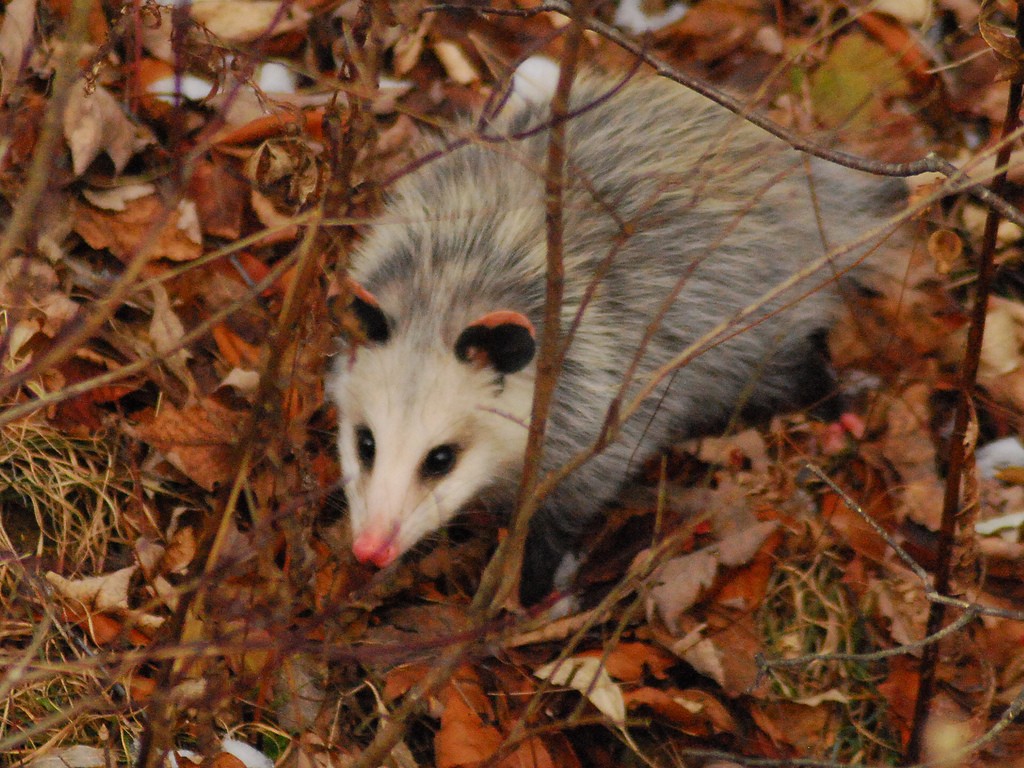 In South America, the disease kills about 45,000 people every year. However, it is very rare in the United States, with only 3 cases diagnosed here.  Among 100 mammal species that are susceptible to the disease, opossum is one of them. The Virginia opossum is hardly infected with it because the disease is almost unheard in the USA. Another disease that individuals mostly think of when dealing with the opossum is rabies. The animal is very resistant to rabies and as such hardly carries it.

The main aim of habitat control is to make your property less appealing to the opossum. It is important to cut back overgrown shrubbery and trees that overhang at rooftops. The trees should be cut back at least five feet from the roof edge. It is important to remove fallen fruit frequently. Ensure your firewood is piled tightly, leaving no big gaps appropriate for a den. Scrap lumber and other things should be kept in an orderly manner, probably about 18 inches off the ground. Garbage cans should have lids that fit tightly and table scraps or food items should not be in your compost bin. You must ensure food kept outdoors for pets is removed by nightfall.

As with raccoons and skunks, the suitable solution to an opossum’s existence beneath stairs, decks, or buildings is to block or screen it out. Close off all potential openings or entrances under the house, mobile home, deck, garden tool shed and so much more using a ¼-inch mesh hardware cloth. The benefit of using the small mesh is that it will also eliminate house mice and rats. 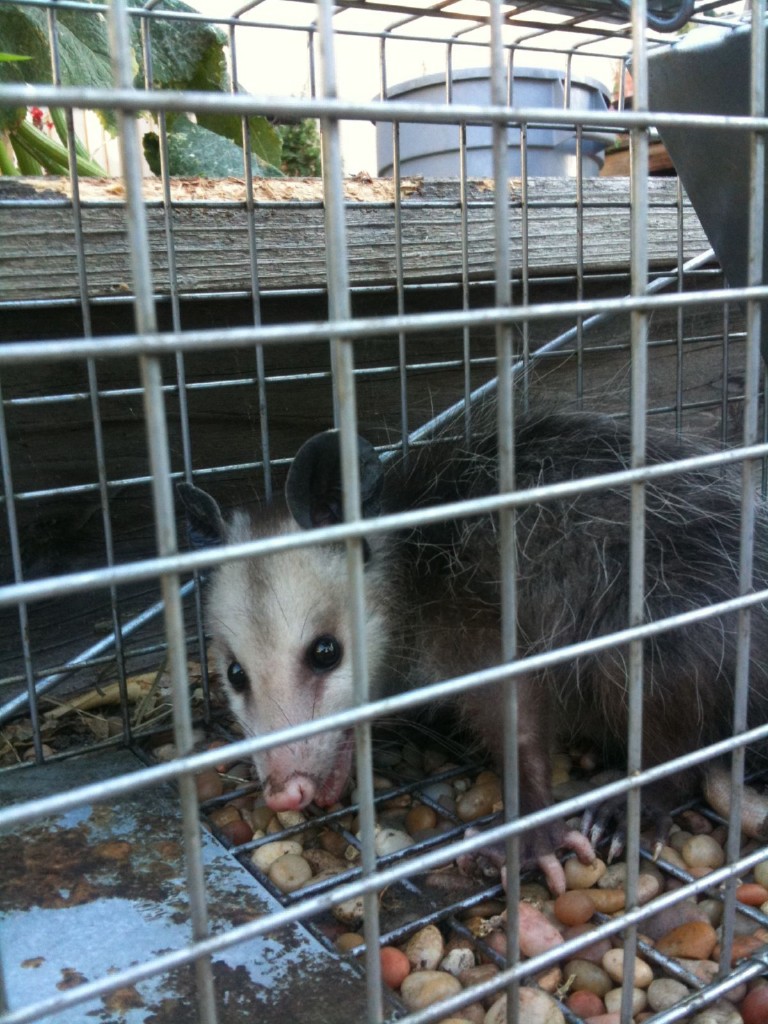 The animals are not cautious of traps and can simply be caught with a box or live catch, or a cage trap.

Live trapping presents the issue of dealing with the animal once it has been captured. Considering it is illegal to relocate an opossum without having a permit, individuals who do not want to deal with the problem of disposing the animal, may consider hiring a professional wildlife control operator. The professionals are equipped to deal with wildlife issues in a humane and legal manner.