(Please call Manchester NH Animal Control for all your domestic animal issues, including dogs and cats at 603-792-5461) 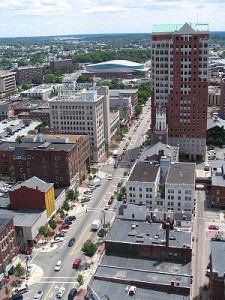 Manchester’s wildlife can be seen in the town’s immediate parks and coast lines. In its walking trails from Cohas Brook, to Piscataquog River Park, to the Merrimack River, several water loving animals like muskrats and raccoons can be spotted. Some beavers, wild rats, opossums, groundhogs, squirrels and bats can also be seen in Rock Rimmons, Pine Island, Black Brook and Livingston Park. However, due to the city’s economic development, some creatures have been displaced and reportedly started entering residential properties.

We’re often asked about the beavers we remove Manchester New Hampshire and just like in all our visits, we do like to share some nice facts and descriptions of wildlife animals. Beavers in New Hampshire are the North American Beaver, which are the common species in northern part of the US continent. Basically known as larger rodents, adult beavers can weigh around 15-30 kilograms. Older beavers can weigh more, to as much as 50 kilograms, as in some instances, in some Manchester NH residential properties where we have removed some beavers.

In Manchester Hillsborough, you might notice the raccoons don’t have long legs. Raccoons actually have shorter legs compared to other four legged animals. Though they have longer and compact body, their short legs does not allow them to run in long distances or jump in great heights. Raccoons usually only go slow in speeds of around 10-15 mph of moderate walking movements. Raccoons are known to move gingerly as they move in search of food and a den where they can rest. Even if raccoons will look harmless when you see them around your block, it would be important to protect you home with raccoon prevention since raccoons can cause damages and spread diseases.

Despite the name, flying squirrels ‘do not fly’. Instead they glide using ‘parachute membranes’ in their ankles and wrists, jumping from one tree to another, with flights up to 80 meters. There is often a misconception on flying squirrels when we inspect and apply removal methods in residences in Manchester NH. Some residents thought of the squirrels as some species of bats, and often they’re fascinated to learn about the flying squirrels.

Known to be herbivorous, squirrels survive through a daily sustenance of nuts, seeds and flower bulbs. The way squirrels work, they would pick acorns and walnuts on the ground and then run in a place to hide their picked up food item. Squirrels like to hide their acorns and nuts underground, often in a garden. They would often swap the acorns with flower bulbs. Some gardeners in Manchester NH would complain on how their gardens are mostly destroyed by squirrels, especially during summer. You should take note of this every season, either applying a squirrel proofing method to prevent squirrels from your property.

Skunks in Manchester NH can vary in sizes, usually from 15-38 inches, with weight around 0.50kg to 8kg. Spotted skunks are usually lighter in weight, with the hog nosed skunks weighing heavier. So far, we have removed several numbers of spotted skunks, as well as hog nosed skunks in New Hampshire. The common problem by Manchester NH residents have been the foul odour, which easily rub off in a room and pretty hard to eliminate.

Bats move in huge numbers when they migrate into their hibernation in caves and mountains during winter. The main reason for this is the scarcity of insects in the cold season. Since insects is the bats main source of food, they often go into deep stupor to conserve their energy, so they can be able to survive until everything in nature starts to thaw and insects starts coming out. In Manchester New Hampshire, this has been the case when we remove hibernating bats in house chimneys and attics. Don’t attempt to remove sleeping bats that you see inside your home. Call bat professionals who are licensed in handling the mammal.

Did you know that the underground animal, mole, subsists mainly on the ground insects they encounter while digging soil? Their favourite of all ground insects are worms, which are high in protein, which pretty much give them all the strong muscles when they dig. You may not be able to see a mole above ground, but if you do, you will notice they have seeming large arms and toes. A single mole can be damaging in a yard. So you need to be alert if you notice mole hills in your lawn.

In Manchester NH, opossums abound in several territorial areas, which lead to several instances of animal intrusions in private properties. Having opossums inside your home, can cause anxiety, considering how dangerous this creature can be. Opossums have sharp teeth and usually not afraid of humans. Children are always at risk and something you should be wary of, by finding a solution to remove it the soonest.

Muskrats can mostly be found in ponds and lake, though there are cases in Manchester NH, where some were seen in pools or garden fountains. Some of the residents we met didn’t know about muskrats, but were alert to call us as soon as they saw one inside their yard. Muskrats like water or wetlands, so if you essentially have some body of water in your home, it is vulnerable to this animal intrusion.

Often known as marmot, groundhogs are a member of the same family like the squirrels. These creatures are larger in size and weight. A groundhog likes to roam in grassy lands, meadows and greens, which sometimes bring them into properties like golf clubs and sports fields. You need to seek the specialized skill of a groundhog removal expert to prevent the creature from entering your place. In Manchester NH, please call our number on the page for appointments or inquiries.

Rats can easily push away customers if you operate a restaurant, cafe or diner. This rodent is one of the most common problems in Manchester NH, which give business owners the headache. There’s no single procedure to remove rats and you would need a concentrated effort using advanced rat proofing and preventive methods. We have specialized rat control methods for Manchester New Hampshire businesses and households. Get in touch with us for details.

You might have heard about the cases of bird flu and other transmitted diseases that can be transferred to people by birds. If you have an extensive area of trees, grass and woods, there’s a great chance this will attract different species of the creature. There are many ways diseases can be transmitted. However, you should never take the chance at any time because, zoonotic diseases often mutate into different strains, which means the cure by scientists today are a step behind from the new viruses out in the open.

Call a wildlife control company as soon as there’s a wildlife animal intrusion in your home. We always recommend prevention and early action to prevent eventualities of damages, injury and health risks.