For your Lower Makefield PA wildlife removal needs for your agency, department, office, store and home in Lower Makefield Pennsylvania, just contact our wildlife specialist on our hotline. We can handle various types of wildlife animals as well as pestilence in Yardley PA. Our experts can deal on dangerous species such as squirrel, rodent, skunk, bats, mice, rats and more. If there are unidentified nuisance animal that entered your home, please don’t hesitate to give us a call. 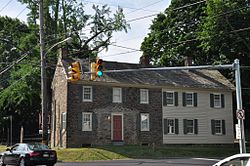 Lower Makefield is a township sometimes called by a lot of people as ‘Yardley’ because of the Yardley Borough nearby. The township is within Bucks County in Pennsylvania and also included in the Philadelphia Metro Area. It is near several other townships and counties in New Jersey, separated only by the Delaware River. Some of the areas are Ewing, Hopewell and Trenton. The township has been voted a couple of time in CNN Money Magazine’s ‘Best Places to Live’ in the U.S. East Coast for places with below 100,000 populations. For its area, it is made up of 17.9 square miles land, with only 0.4 square miles of water. The town experienced growth throughout the years with many housing developments and corporate offices built within the township. A notable nature area in Lower Makefield which attracts wildlife animals is the ‘Five Mile Woods Preserve’, which is an undeveloped tract of land which is continuously preserved not just for nature lovers but for the rest of the community. Other parks in the place also include Community Park, Veterans Square and Heacock Meadows.

Trapping of raccoons in Lower Makefield are the most common way to remove gray fur wildlife animal. Often times, the traps have food bait such as cat food or liver spread to invite the raccoon. The raccoon trap need to be placed in an area where it is said to be an access point of the animal. You have to become aware though that raccoons can sometimes learn or recognize traps. Raccoon are said to be clever creatures, the reason there should be many other ways (in combination with traps) to catch the wildlife species. You can ask a Pennsylvania wildlife company regarding these procedures.

Squirrel, the newly born, is often born with no incisors and with very little hair. It is usually taken care of two to three months by their squirrel mother. The young squirrel becomes mature after ten to twelve months where it becomes independent in search for food and where it also becomes sexually mature. Squirrel species often vary, with the tree squirrels living alone most of the time, while ground squirrels often joining in groups with other squirrels.

Removing bats in Lower Makefield require lots of work. Some home owners try to let the bats leave by opening windows and doors. However, most of the time this doesn’t work, even so allows other wildlife animals to enter the house. There are cases also where residents become too careless and handle bats with their bare hands. This is dangerous by all means. Even professionals and long time Pennsylvania wildlife company experts use glove and other safety gears for precaution.

It takes a while before young skunks starts to leave the care of their mother skunk. Even the older skunk wouldn’t usually allow small young skunks to leave and live on its own if it is not ready. The younger baby skunks are often vulnerable to big predators such as bobcats, fox and wolf. Large strong birds such as horned owl and hawk are also well known predators of younger and smaller skunk. Most of the time, the adult mother skunk would only allow their off spring to be on its own of it has fully developed its whole body and if it has also learned to spray its musk.