If you need Warminster PA wildlife removal specialists to handle nuisance animals that invade and intrude your home or establishment, just dial our number on the page. We can work on squirrel removal, rodent control, raccoon trapping, bat exclusion, rat removal, mice control, skunk removal and other wildlife management solutions. If you have problems with persistent animal intrusion, even after an animal has been removed, it should be time to get assistance wildlife professionals. 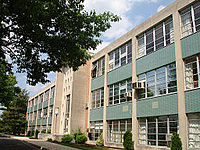 Warminster Township is within Pennsylvania’s Bucks County, located just 3.6 miles from the northern western part of Philadelphia. It is made up of mostly land at 10.2 square miles. The communities within the township include Hartsville, Warminster Heights, Johnsville, Casey Highlands, Breadysville and Rosewood Park. The place was established in 1685 and was once part of Southampton. It was named in honor of a small town in Wiltshire in Salisbury Plain England. The first settlers of the township are mostly Scottish, Irish and English. It was mostly an agriculture and farming town, where it only had its residential subdivision and housing units in 1955. A notable facility within the area is the Applied Research Laboratory of the Pennsylvania State University. There are many recreation and park areas in Warminster which makes the area a roaming ground for wildlife species. There’s more than 420 acres of nature areas and 5 mile of nature trails, with 13 parks.

There are people who try to catch the bats they saw inside their home. Often they would imitate several videos on how to catch and remove bats. However, this can be dangerous since bats can be rabid and can bite without any warning. Remember that even the Centers for Disease Control issue strong warning in handling bats because of the many viruses and bacteria it has in its body. Bats in Pennsylvania are known to be live reservoir of zoonotic pathogens, so it’s not good taking things for granted in handling the flying mammal.

No one wants to have any rats in their home, let alone in their business. Rats carry around a lot of bacteria, which can easily be transmitted to people. Rat urine, saliva and droppings can come into contact with people with little detection. Rat exterminators, notably professional and licensed practitioners, can be asked for assistance to ensure safety and effective rat control in Pennsylvania. It wouldn’t be any use for ‘do it yourself’ methods, since most of the time the solution is temporary and other rats enter after seven to ten days.

How do you remove a raccoon inside the home? Trying to catch a raccoon with your hands is not advisable since this animal can either scratch or worse bite your hands and arms. Even wearing gloves would not be enough since a raccoon can slip by your hold and jump into your face. It is actually very risky holding a raccoon if you’re not experienced in wildlife animals. Even wildlife professionals with years of experience get attacked by rabid raccoons, let alone for individuals who really have not handled wild animals for long.