For your Princeton NJ wildlife removal needs for your home, business, department, facility or establishment in Princeton New Jersey, just contact us through our phone number listed on the page. We’re a local wildlife company that has been serving communities in New Jersey and Philadelphia in range of wildlife services that include animal entry prevention, wastes clean-up, animal urine decontamination and general wildlife management on different types of species. Let us know your inquiries and questions on wildlife control and nuisance animal removal in Princeton. 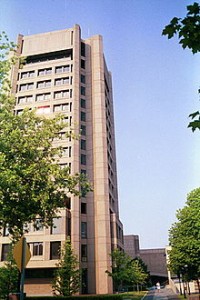 “Fine-hall-princeton” by Joseph Barillari at en.wikipedia. CC BY-SA 3.0 via Commons.

Princeton is one of New Jersey’s well known municipalities located within Mercer County. The place was consolidated into one city, from Princeton Township and Princeton Borough in January 2013. The community is still roughly divided as a borough and township in some aspects. Comprised of 17.9 square miles of land and 0.43 square miles of water, the place was founded dating back to the 17th century. It is the location of one of the prestigious institutions in the U.S., the Princeton University which was established in 1756. There are several other important organizations within the city limits such as Siemens Corporate Research, Westminster Choir College, FMC Corporation, Princeton Plasma Physics Laboratory, SRI International and Dow Jones & Company. Princeton has been consistently ranked by Money Magazine as one of U.S. Top Towns to Work and Live. Several important places within the city limits include Westminster Choir College, Maybury Hill (Joseph Hewes home), Drumthwacket (the Governor of New Jersey residence) and Albert Einstein House.

The raccoons are generally protected wildlife animal in most states and cities. It means you can’t just catch a raccoon to transfer and relocate it somewhere else. You would need a permit for handling a raccoon. National wildlife also requires licenses in handling wildlife creatures. Most home owners and residents try to catch and handle a raccoon out of curiosity. However, they end up getting injured since they know safety procedures. If you think of it, there’s less trouble and hassle if you would just call a wildlife company, who are professionals on nuisance animal trapping.

Bats in New Jersey, whether single mammal or large colonies can enter households and buildings in many points of entry. Residents and property managers usually don’t know where to look. After some period, bats have already build their roost in an unoccupied room or space and have already left a lot of droppings, insects scraps and other wastes. This can be unhealthy on all accounts and can develop into fungi which can be inhaled by people. Avoid this build up of bat droppings in Princeton as they can cause many illnesses and could be fatal for some people even causing death.

The small rodent species mouse or mice have physical traits in the form of snout which is pointed and round small ears. This small little creature is a common house intruder and has been a problem in a lot homes, restaurants and food stores in Princeton. Mice are easily attracted by food and water. It usually takes advantage of households in the deep sleep of people in the night. The mouse generally has scaly long tail, usually as long as body length (or even longer tail). In New Jersey, it’s difficult to control mice since it has a high rate of breeding.

Sometimes tree squirrels can be generally referred as the ‘squirrels’, since these creatures are well known tree living wildlife animals. They can mostly be seen in all continents, especially tropical regions, except extremely cold areas like Antarctica. Some of the squirrel species seen in New Jersey are Prospermophilu, Similisciurus, Oligosciurus, Kherem and Vulcanisciurus. The tree squirrels aren’t necessarily a single monophyletic group, but closely related to many other variants of squirrels like the flying squirrels and ground squirrels.