We provide West Windsor NJ wildlife removal of opossums, rodents, squirrel, snake, bats, groundhog, mice and other pestilence infesting species. Don’t allow a nuisance creature start damaging areas in your home. Sometimes, leaving a wildlife animal den for three days is enough to cause infestation. We’ve encountered cases where rodents start breeding in uncontrollable rate in buildings and estate mansions, that it took a while to remove the critters. Don’t wait for a week or put off nuisance animal problems. 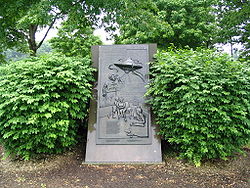 “Landingsite statue” by ZeWrestler on en.wikipedia. Public Domain via Commons.

Established as a township in 1798, West Windsor is part of the first created 104 townships in New Jersey. Comprised of 25.5 square miles of land, it has 0.71 square miles of water. It is within Mercer County and has several portions of Princeton Borough added in 1813. Several communities in the area still use ‘Princeton’ in their address, particularly Princeton Junction. Also, a portion of the 400 acre of Princeton University, with areas of Lake Carnegie is located in the territory. Forbes Magazine included West Windsor as the fifteenth wealthiest U.S. neighborhood in 2008. One of the notable mentions of West Windsor is in Orson Welles 1938 broadcast of ‘War of the Worlds’. The communities and towns that border the area are Plainsboro, Robbinsville, Lawrence, Princeton, Hamilton and East Windsor. West Windsor’s frequently visited parks and nature areas include West Windsor Community Park, Richard J. Coffee Mercer County Park and Duck Pond Park which draws several wildlife species from New Jersey forests and conservation areas on a regular basis.

For the general public, you can’t just hunt down, shoot or capture a raccoon. You can’t just remove the wildlife gray fur animal and then transfer it to a public park or nature space in New Jersey. There are ordinances, national and state laws that prohibit the public from relocating a raccoon. Even cities and local municipalities have legislation on proper handling and transfer of wildlife species. The best means to extract a critter is to contact a raccoon specialist from a wildlife company.

An interesting behavior of an opossum is by copying the smell, appearance of a dead animal. The possum mostly display this instinctive physiological trait and not necessarily as a conscious response. This is common for adult opossums, but not yet for young baby opossums which has undeveloped brain and skull. This unconscious act is called ‘playing possum’ or sometimes ‘playing dead’. Opossums in West Windsor NJ act this way whenever they feel threatened by another animal or by people.

The Sciurusis is actually another sub-genus of main species of squirrels. The three most common are the fox squirrel, eastern gray squirrel and red squirrel. These species mostly live in their natural habitat in West Windsor forests and wildlife preservation areas. However, with the continuous city developments, expansions and economic growth of cities, these squirrels have learned to adapt with people nearby. The wildlife creatures have also often been reported invading and intruding households and establishments in New Jersey.

Bat specialists usually enforce extreme caution when removing bats and bat colonies in buildings, estates and houses. There are many cases where there are young little baby bats in the roosts. Wildlife professionals generally avoid causing harm to wildlife animals whether alive or sick. They usually make sure a live creature would be relocated properly, while the sick species can still be rehabilitated if possible. This is normally done with the bats removed or excluded from New Jersey home or establishment.